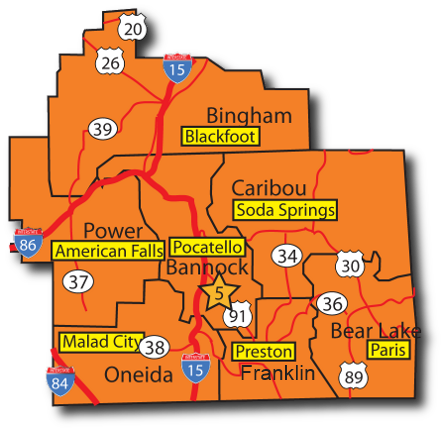 District 5 is located in the southeastern corner of the state with headquarters in Pocatello. District Five’s boundaries are formed by Wyoming on the east, Utah on the south, Raft River on the west and the City of Shelley on the north.

Notable landmarks in the district include the Snake River, the Caribou National Forest, Bear Lake, the Fort Hall Indian Reservation, and Idaho State University.  Interstates 15 and 86 run through District Five as do US highways 30, 91, and 89. Many of these highways were built on the original Old Oregon Trail routes and Pocatello is considered the “Gateway” to the northwest.