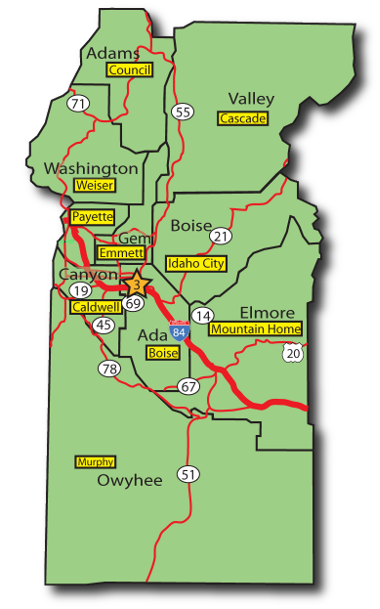 District 3 stretches from just north of the 45th parallel on US 95 in the Little Salmon River Canyon to Bliss, Idaho in the south. The western Border of the District is the Snake River east of Ontario, Oregon. District 3 encompasses the Treasure Valley area of Idaho which has the the largest population in the state.

Approximately half of all Idahoans live in this area consisting mostly of high desert plateau in the south and mountains to the north. Boise is the world headquarters for many major international and national companies.

Notable landmarks in the area include the Snake River and Bruneau River canyons, the Idaho State Capitol Building, the World Center for Birds of Prey, and Mountain Home Air Force Base.

Boise has everything from the Shakespeare Festival and museums to semi-professional baseball and hockey. There is also a diverse selection of outdoor recreational opportunities.