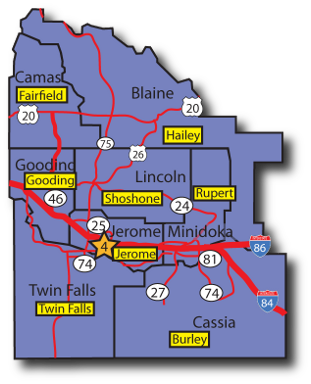 District Four stretches from the Utah and Nevada borders on the south to the Sawtooth Mountains and the headwaters of the River of No Return (Salmon River) on the north. District Three to the west and District Five to east form the other boundaries of the district.

Sun Valley and the Sawtooth National Recreation areas in the northern part of the district are popular destinations in District Four.

Other landmarks include the Snake River Canyon, Shoshone Falls (the Niagara of the West), the City of Rocks and the College of Southern Idaho.