The Idaho State Police is made up of more than 600 women and men, each dedicated to providing their best service possible to the people of Idaho. Public safety is essential for strong, healthy Idaho communities, and the services provided by the people of ISP support businesses, motorists, community-based criminal justice and victim resources, and law enforcement partners statewide. We’re proud to say, outstanding work happens here every day. Although we wish we could capture and share more of that effort, here are just a few examples of individual stories that had an extraordinary impact.

As always, thank you for your support.

ISP Cpl Aikele was working in Bingham County, when he heard a call about an unresponsive subject. He quickly responded to the scene and found the victim unconscious and not breathing. Cpl Aikele began CPR and continued for over ten minutes until additional medical personnel arrived. Cpl. Aikele assisted further when the ambulance experienced a mechanical problem en route to the hospital. Cpl. Aikele provided traffic control and helped safely transfer the patient to the second ambulance so they could continue to the hospital. Paramedics who responded credit Cpl Aikele and his quick and continued assistance for saving the patient’s life that day. Cpl Aikele’s dedication to safety is a great example of the service the men and women of ISP Provide throughout our state every day.

Cpl. Steve McClain was working in the city of Twin Falls when he spotted flames coming from a residential duplex. As the house began to fill with smoke, Cpl. McClain escorted two adults and two children out of the burning structure. After getting them safely away from the flames, Cpl. McClain ran to the adjacent residence and began yelling to warn people of the impending danger. When Cpl. McClain saw an adult male struggling to get out of the thick smoke; he quickly helped the man and his pet dog get away from the fire. Cpl. McClain is a great example of how the men and women who serve with ISP risk their own safety to serve and protect others.

When ISP Trooper Bryce Rutland heard the call of a possible overdose, he knew he had the training and tools to help. Trooper Rutland responded to the scene and found the person unresponsive and not breathing. He quickly administered a dose of Narcan which was crucial in allowing the individual to hang on until EMS units arrived to continue lifesaving care.

Trooper heroically responded to a citizen’s plea for help and demonstrated professionalism and empathy as he worked to help save the life of a person in crisis. Because of his help, a life was saved.

When a crash occurred on the Malad Gorge Bridge last March, it left two people and their pets holding on for their lives hanging as their pickup dangled dangerously over the deep canyon. But what folks may not know is that an ISP Regional Communications Officer was working in a dispatch center miles away helping get the right people and the right tools to the scene to save lives.

It was March 15, 2021, when ISP RCO Cappello answered a call reporting a crash involving a vehicle over the bridge. He quickly recognized the life-threatening situation for the people trapped inside the pickup. Within moments, RCO Cappello had requested multiple emergency units, heavy tow trucks, and additional rescue equipment respond to the scene.

RCO Cappello’s efforts were extraordinary that day, and this past week, he was recognized with the Idaho State Police Distinguished Achievement Award. During the ceremony, ISP Captain Haight commended RCO Cappello for his dedication and follow-through throughout the lengthy and complex rescue. He also quoted ISP Trooper Taylor, who was first to respond to the scene that day, that, “RCO Cappello did an outstanding job. He coordinated things quickly, and had backup plans for our backup plans”.

RCO Cappello and the other men and women who serve in the ISP Regional Communication Centers are trained to have the unique skill of find creative solutions for sometimes life-threatening situations. Quick, ‘out-of-the-box’ action under pressure isn’t for everyone. But those who serve in the ISP RCO’s, remaining calm under pressure and acting quickly when seconds count is what makes the difference for the people of Idaho. It’s how we serve, and how the Idaho State Police helps change and save lives every day.

The men and women who serve in the ISP Regional Communication Centers are committed to providing whatever assistance they can to the thousands of people who contact our communication centers each year. Many times, it’s an emergency, and the assistance they provide saves lives.

However, it wasn’t an emergency when they were contacted by a woman who needed help identifying several photographs she had taken during a vacation in Idaho. That didn’t keep RCO’s Hazel and Seavey from using all their resources to help the woman. They even enlisted the help of ISP Trooper Sherbony, the resident trooper in Salmon, to help with a few of the photos taken in Central Idaho. Working together, they helped the vacationer with the names and locations of where her photos were taken, making her souvenir photo album of her trip to Idaho complete.

The men and women at the other end of an emergency call are trained and prepared to dispatch a huge variety of resources to ensure public safety. In this case, the RCO’s themselves were just the resource one visitor needed. 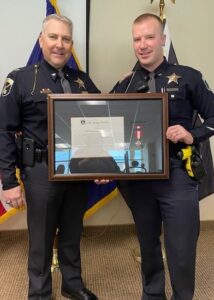 When Trooper Shively arrived on the scene of a serious injury crash, he knew the victim needed help right away.  He quickly began life-saving measures and continued doing CPR until paramedics arrived.  Trooper Shively’s actions helped save the person’s life. 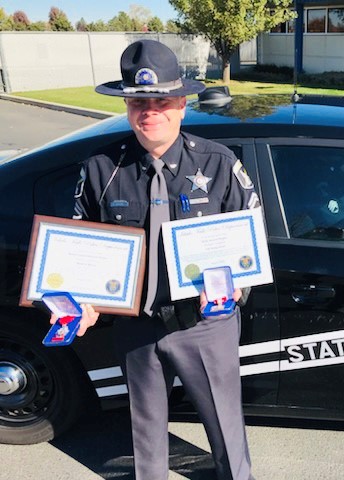 Tpr Peeples was one of the first to arrive on the scene of a house fire in Idaho Falls earlier this year.  Knowing there were victims trapped inside, Tpr Peeples risked his own safety by crawling through thick smoke to locate the unconscious victims.  He helped get the victims out of the burning house and also drove the ambulance to the hospital to allow paramedics to provide much needed medical attention to the elderly victims. 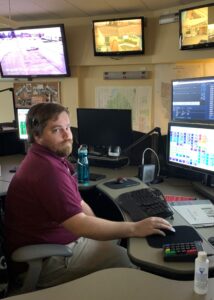 RCO Wise was working in the ISP Regional Communication Center in Coeur d’Alene when he received a call from a person in Australia.  The person was concerned about a friend who was making threats to harm themself on social media.  RCO Wise used every tool available to help locate an address for the young person in Central Idaho.  RCO Wise contacted local law enforcement and medical responders in the area and gave them the information.  Thanks to his quick and diligent work, the young person was transported to a local hospital where they are expected to make a full recovery. 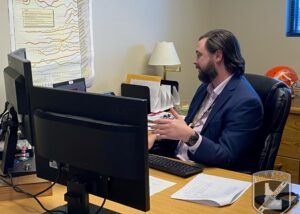 Hats off to Thomas Strauss, Danielle Swerin, and Misty Kifer, who designed, collected responses, and authored the award-winning report.  Their work helps stakeholders throughout the criminal justice system make improvements that benefit communities and individuals throughout Idaho. 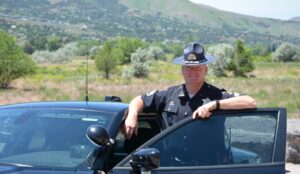 Sergeant Orr was awarded an ISP Life-Saving award for his quick action that prevented a violent fugitive from putting other officers or the public in greater danger.  Sgt Orr put his own safety at risk by using his vehicle to block the fugitive’s from driving away.  He also acted quickly to disarm the subject before the subject was able to fire at officers.  Sergeant Orr’s actions stopped a dangerous situation before anyone was seriously injured or killed. 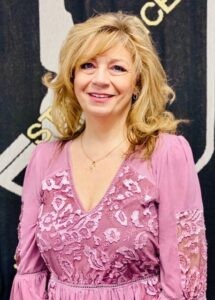 In RCO Orren received information from a local law enforcement agency about a missing, possibly runaway juvenile. After looking at the information thoroughly, RCO Orren took the initiative to contact the agency and, after discussing the situation, helped the agency contact the ISP Missing Persons Section, and an AMBER Alert was issued.  The juvenile was located a short time later by authorities in California.  When found, the juvenile was with two subjects with ties to human trafficking.  Thanks to RCO Orren taking an extra few minutes to find the additional information, the juvenile was returned safely to her family in Idaho. 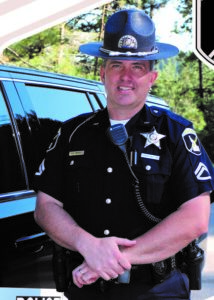 Idaho State Police Trooper Mark Wright understands what serving others means.  When the local sheriff’s office asked for assistance with a person in crisis, Trooper Wright responded. Being familiar with the person, Trooper Wright was able to talk with them and learn more about what was happening.  After several minutes, Trooper Wright became concerned that the person needed medical help right away.  Trooper Wright used his training and experience to resolve the situation safely. He disarmed the person and got them safely to medical responders.  Thanks to Troopers Wright, the person was able to get the help they needed.